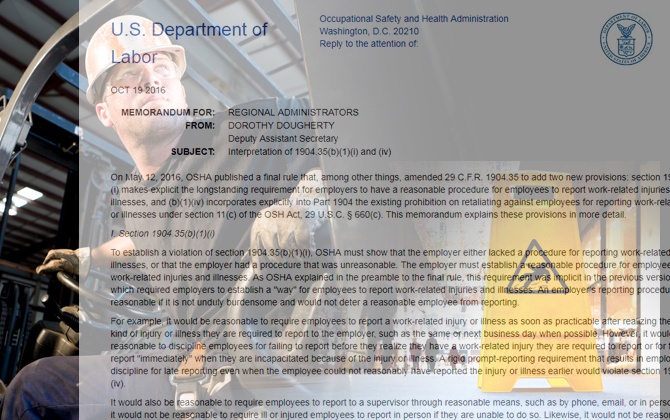 In an Oct 11 Memorandum, OSHA clarified that post-incident drug testing and safety incentive programs are not prohibited under the anti-retaliation provisions in OSHA’s electronic recordkeeping rule. This was in response to a 2016 Memo where OSHA explained that drug testing employees who report injuries or illnesses is prohibited unless an employer has an “objectively reasonable basis.”

“The Department believes that many employers who implement safety incentive programs and/or conduct post-incident drug testing do so to promote workplace safety and health. In addition, evidence that the employer consistently enforces legitimate work rules (whether or not an injury or illness is reported) would demonstrate that the employer is serious about creating a culture of safety, not just the appearance of reducing rates. Action taken under a safety incentive program or post-incident drug testing policy would only violate 29 C.F.R. § 1904.35(b)(1)(iv) if the employer took the action to penalize an employee for reporting a work-related injury or illness rather than for the legitimate purpose of promoting workplace safety and health.”

Further explained in the  Oct 11 Memorandum OSHA stated that incentive programs that seek reductions in the number of injuries and illnesses reported, or rate-based programs, are permissible if they do not discourage reporting — adding that employers who withhold a prize because of an injury report are not in violation as long as the employer has implemented adequate precautions to ensure that employees feel free to report an injury or illness.

Examples provided in the memo include:

*Please note that this message is to inform you of the clarification put out by OSHA. For legal advice, always consult with legal counsel on any issues or matters.